“Rescue, Rehabilitate, Release” are the aims of Lola ya Bonobo (or Friends of Bonobos), the world’s only organization – established in the Democratic Republic of Congo, 2002 – to care for injured and orphaned bonobos affected by habitat destruction, the pet trade and the bushmeat trade.   For more information on this important sanctuary see: 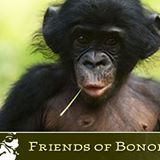 The proposition that other primates exhibit culture was challenged in previous decades as being part of a distorting anthropomorphism, but in recent years (and since Jane Goodall’s earlier assertions) evidence to substantiate this conclusion has been growing.  For instance, read this article from earlier in July that highlights the development of traditions in chimpanzee societies and the ape’s cultural potential:  ‘Grass-in-the-ear’ technique sets new trend in chimp etiquette: Chimpanzees spontaneously copy arbitrary behavior — ScienceDaily.

In a previous blog, I introduced Peter Boomgaard’s argument from the perspective of a historian regarding the evolution of morality presented by de Waal.  Boomgaard asserted the following (2008):

Boomgaard is concerned that de Waal does not tackle these issues in Primates and Philosophers.  But de Waal’s argument (and others’ coming to similar conclusions) rests on the understanding that morality has evolved in social animals, because they live in groups and must then consider relationships when making individual decisions; doing so can give them a survival advantage.  It seems the most important question to ask would be whether the common ancestor was a social animal, as are most primates – perhaps, due to this fact (the fact that most primates are social animals), it could be surmised that the common ancestor was as well, and it might be possible to prove life in groups from fossil evidence.  And if it can be somehow concluded that the common ancestor was a social animal, then de Waal’s theory would stand up well.

Of course, Boomgaard’s second point must be kept in mind, as it reminds us of the dangers of anthropomorphising, and thus the covering up of unique characteristics of each species that have developed and continue to develop over time (remembering, of course, that within species individual variation is the stuff of evolution).  Plumwood’s emphasis on sameness and difference from within a feminist perspective is useful here, when considering nonhuman primates and morality and whether this consideration is part of a project of “legitimate” anthropomorphism or not:  “feminist theory has developed logical and philosophical frameworks based on maintaining the tension between Same and Different rather than generally eliminating difference in favour of sameness or vice versa.” (2000, p. 65)  Pamela Asquith asks the question “What is the modern role of anthropomorphism in primatological studies?” (2011)  Asquith returns us to the importance of language in descriptions of nonhuman primates.  She distinguishes between ordinary language terminology and technical language, the latter avoiding descriptions that attribute agency to animals (which are more objects of study rather than subjects and “actors”) and appears more aligned to the ethology of old (behaviourist to a fault).  An upcoming blog post will consider Asquith’s perspective more fully and in relation to de Waal’s and other primatologists’ studies (such as Goodall’s).